"If the God you believe in as an idea doesn’t start showing up in what happens to you in your own life, you have as much cause for concern as if the God you don’t believe in as an idea does start showing up. It is absolutely crucial, therefore, to keep in constant touch with what is going on in your own life’s story and to pay close attention to what is going on in the stories of others’ lives. If God is present anywhere, it is in those stories that God is present. If God is not present in those stories, then they are scarcely worth telling." ~ Frederick Buechner

This is a story about a little boy named Judah ... and his brave mama's heart of compassion:

A Small Step toward Freedom

In an uncharacteristic move this afternoon, I chose to exercise extreme self-discipline and ignore the laundry and lunch dishes that were loudly calling my name and took a nap instead. It was only half an hour, but those of you who know me well know that it was a small victory for me.

Little B did something quite minor ... and I screamed. I don't just mean yelled. I mean, utterly-out-of-control yelled. I scared both of us badly, and as I couldn't stop myself right away, I walked into my bedroom, closed the door, and texted N.

And with my little boy sobbing on the other side of my door, "I'm sorry, Mama. Forgive me? I'm sorry," I sent a plea for prayer to an older friend with shaking hands. She called me soon thereafter, spoke words of affirmation and calm over me, and then encouraged me to call my doctor.

That was a hard phone call to make and honestly, if I didn't know that Mama Jill would be checking up on me within a few days, I don't know if I would have made the call.

But knowing that there was accountability there AND knowing how much my childhood was shattered at times by anger and yelling (and not wanting that for my children), I left a trembling voice message for the nurse. She called me back, asked a few questions, consulted my doctor, and set up an appointment for me.

A couple days later, I left B with a good friend and headed off to that appointment. All the way there, I kept tearing up, wondering if I was an awful mother, if I was crazy, if I needed medication, and if I did, how that would affect nursing. I wondered if I was ruining my son, if I was fit to be a parent, and why I couldn't hold it together and do everything.

Mercifully, my OB ruled out PPD pretty quickly, but she did say that I had an anxiety issue, probably stemming from my overachiever personality.

She asked if I could call my mother to come help, and I explained for what felt like the hundredth time about how my parents lived overseas (and felt, all over again, all the grief that comes with that). We both agreed that taking medication was not the right thing for me at this point (because she knows how I feel about drugs in general but also because she knew I didn't want to be that person who sits on the couch all day, staring at the dirty house and not caring). Long story short, she gave me the prescription of REST, ask for help from church friends when I need it, vitamin D, and to seriously cut myself some slack.

Honestly, the only thing on that list that I saw as realistic was taking the vitamin D.

And I told her so. I told her how the thought of leaving chores undone, albeit temporarily, freaked me out. It made me feel panicky to think of piles of laundry sitting unfolded. Because you know how it's the "in" thing right now for young mothers to say, "To heck with the house! Just play with the kids!"? Well, I'm not that mom. Not only do I believe that children should learn to play by themselves and exercise their imagination, I also believe that part of being a good mom and wife is making sure that home is a haven for my family. And that haven isn't filthy or messy in my mind. I don't want my kids growing up thinking that it's okay to live in a pigsty. And to leave a sink full of dirty dishes for a few hours feels to me like the beginning of a slide down a slippery slope to that pigsty.

And a haven doesn't involve yelling and screaming either.

So I got home, talked it over with N, and decided that this, too, was an issue of pride, self-discipline, and bondage.

I could not allow my neuroses about the upkeep of the house take precedence over my family. I saw addiction my entire childhood and continue to see how it makes people selfish, unable to resist the addiction, even if it means sacrificing relationships.

I don't want that for me or for my family.

In today's Lenten reading from John Piper, he said,

"We need to use our imagination to put ourselves back into his place and feel what he felt. I don’t know of any other way for us to begin to know how much he loved us. Remember, when you think of Jesus’s resolution to die, that he had a nature like ours. He shrunk back from pain like we do. He would have enjoyed marriage and children and grandchildren and a long life and esteem in the community. He had a mother and brothers and sisters. He had special places in the mountains. To turn his back on all this, and set his face towards vicious whipping and beating and spitting and mocking and crucifixion, was not easy. It was hard.

...Jesus was not accidentally entangled in a web of injustice. The saving benefits of his death for sinners were not an afterthought. God planned it all out of infinite love to sinners like us, and he appointed a time. Jesus, who was the very embodiment of his Father’s love for sinners, saw that the time had come and set his face to fulfill his mission: to die in Jerusalem for our sake.


As I read those words, it occurred to me that Jesus lived and died freedom in that He did exactly as was divinely intended for His entire life, even down to the way He died. He chose to walk the path that God had laid out for Him.

That's what I want, to be free to say "Yes" to all that God has for me.

This past weekend, our arts pastor spoke about the Holy Week, and how Jesus intentionally rode into Jerusalem, weeping because He knew that what His people wanted (a conquering king) was not what they needed (a redeeming Savior). Yet He chose to go anyway, knowing that He would be unfairly convicted and sentenced.

We were shown two stages of Rembrandt's etching, Christ Presented to the People. 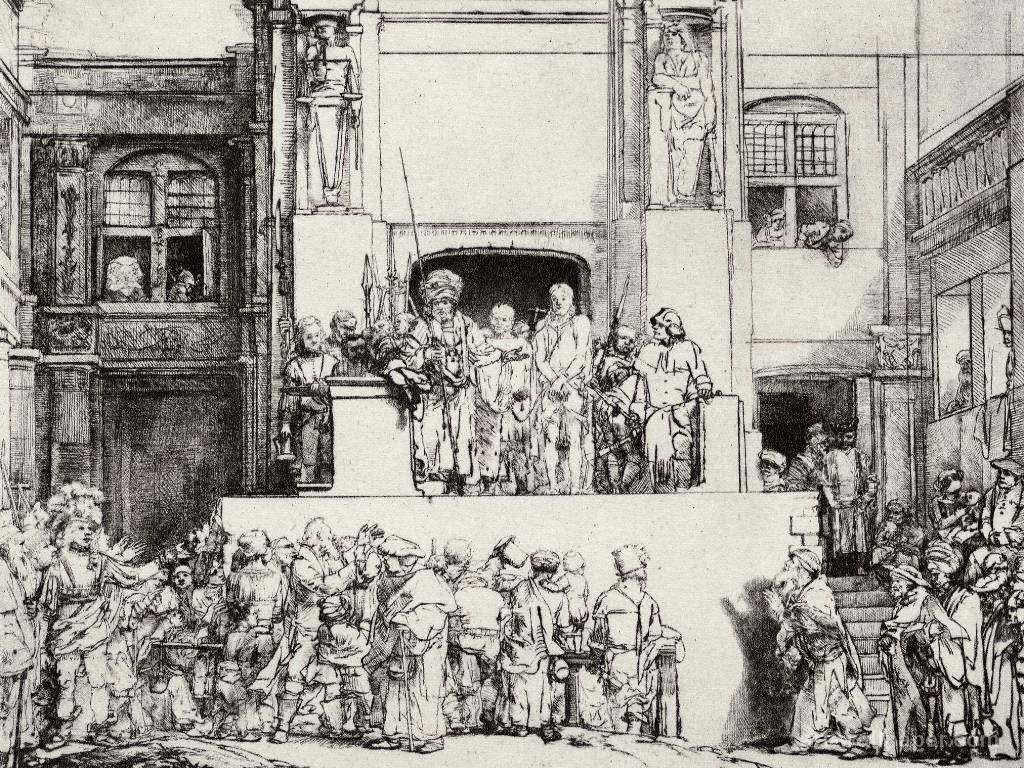 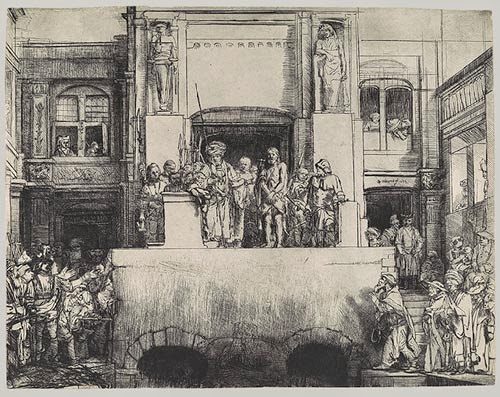 Rembrandt removed the crowd at some point. Pastor Greg asked us, "Who is Jesus looking at in the second one?"

He's looking at me, and asking, "Am I still the Savior you want to follow?"

It may seem like such an insignificant thing to most people, but for me, choosing to take that nap today (and choosing to share this story here) was meeting Jesus' eyes, taking a step away from bondage and toward freedom with Him.
Posted by Unknown at 3:32 PM 1 comment:

Fill your paper with the breathings of your heart. (W. Wordsworth)