"If the God you believe in as an idea doesn’t start showing up in what happens to you in your own life, you have as much cause for concern as if the God you don’t believe in as an idea does start showing up. It is absolutely crucial, therefore, to keep in constant touch with what is going on in your own life’s story and to pay close attention to what is going on in the stories of others’ lives. If God is present anywhere, it is in those stories that God is present. If God is not present in those stories, then they are scarcely worth telling." ~ Frederick Buechner

If you know me, you've probably heard me talking about Ten Thousand Villages. I've shared on here about the organization in the past, and it thrills my heart to no end that I have friends who serve on the board and have worked with the host organization, MCC.

TTV has beautiful handmade items from all over the developing world - Asia, Africa, Latin America, and the Middle East. As "one of the world's largest fair trade organizations and a founding member of the World Fair Trade Organization (WFTO), the company strives to improve the livelihood of tens of thousands of disadvantaged artisans in 38 countries."

Two weeks ago, TTV was having free shipping, and I just couldn't resist checking out the website - or at least, the clearance section.

(I should mention here that all the artisans are always paid in full, so even though items may be on clearance, those who made them have already been compensated with fair wages.)

I found some gorgeous things, but since I had no specific purpose for purchasing anything, I limited myself to items under $5. That might not sound like much, but I did manage to find two terrific treasures.

When Nich and I got married, we started an annual tradition of purchasing a Christmas ornament for our tree. It only made sense to continue a version of that tradition when Little B was born (where he gets an ornament in his stocking each year). I found this year's ornament for $4, from India.
I also found these cards for $1 a piece, which is a total steal. I mean, think about how much a comparable card (with the "scrapbook" handmade look) costs at Target or any bookstore. The red silk paper has a poem by renowned Bengali poet Jasimuddin Mollah (1903-1976):


"Let's go to a green, serene village
where vine and leaves lie together
in a deep shadow of forest" 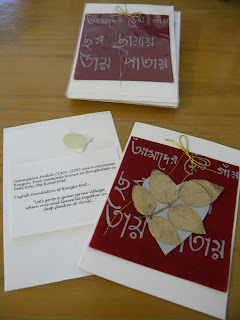 Aren't they beautiful? I bought ten to send to people I love.

Are you in need of a gift for a special occasion any time soon? TTV does have actual, physical stores, but if you don't live anywhere near one, fear not! Please consider checking out Ten Thousand Villages.

Mine are: the time spent waiting for news (trust!), toddlerhood (and yet, so grateful for my little boy), cleaning up the kitchen at the end of the day (but thankful for the abundant provision of food, dishes, pots, running water...)

In summer, the song sings itself.*

Last week was made up of mostly dreary, muggy summer days, and little boys do not do well cooped up inside for days on end. We tried to take every opportunity for outings, whether it was just stepping out onto the deck to blow bubbles or dashing to the playground at the mall to run off some energy while it poured outside. Saturday was my dad's birthday (Happy birthday, Daddy!).

We made a trip to Halfmoon to the Korean store to stock up on some goodies.

Those two things aren't really related, except for the fact that in honor of my dad's birthday, we bought the ingredients to make samgyeopsal for dinner that night. The irony, however, is that my dad doesn't really like samgyeopsal that much. He's more of a seafood man. But we enjoyed dinner! Before we went to the store, though, we stopped for breakfast at Cracker Barrel. We love Cracker Barrel and before we had Little B, whenever we headed out on a road trip, we always timed our departure so that we could hit Cracker Barrel for breakfast. It was the first restaurant where Little B "ate out" (meaning I brought along homemade baby food to feed him).

Did I mention we love Cracker Barrel?
Anyway, we discovered that those little games with the golf tees that they have on the table kept B occupied for a good while. N and I got to actually take our time looking through the menu -- though I don't know why we bother; we get the same thing almost every single time. N and I stayed up much too late Friday night watched the Olympic opening ceremony, which resulted in me going to bed at a ridiculously early hour on Saturday.

This morning, I'm all thrown off from the wonky sleep patterns of the weekend (On a related note, N recently told me that many adults essentially put themselves through something similar to jet lag every weekend, because they don't maintain their normal sleep pattern). So I opened the coffee from Costa Rica that one of the kids from our youth group brought back for us last year, and now I'm hopped up on caffeine.

Clearly, my brain isn't making rational decisions, because I decided on this muggy day that it was a good idea to use up the bananas in the freezer and bake. Little B wanted to "help", so I let him stand on the stepstool and play with measuring cups and spoons. He sneaked his first taste of chocolate by swiping a stray chocolate chip right out from under my nose.
This is the first time I've used this particular recipe, and it is SCRUMPTIOUS. It has sour cream in it, which make for a denser bread than most banana breads. It's not quite as moist as other recipes make, but I really like it! Try it out for something different!

A Blanket for Baby Tessa

My friend Zoe is expecting her fourth baby, and she asked if I would make The Blanket for Baby Tessa, who is due to arrive in September. This is the first time I've actually been asked to make something, and I was more than happy to comply. Thankfully, it also gave me something to do on our lo-o-ong road trips to St. Louis and Chicago earlier this summer (I keep meaning to post about those trips. I'll get around to it eventually!).

Zoe picked out the colors and asked for granny squares, but left the specifics up to me.

Nothing says "home" like a pot of soup and curling up with a soft blanket, hence the title of today's post.

Today is sunny, cool, and breezy, a welcome reprieve from the hot muggy days we've had of late.

Mr. B and I went for a walk this morning. It started with just taking the trash to the dumpster, but it was such a beautiful day that I decided to keep walking. We talked about the wind in the trees, picked flowers, laughed (for some reason, he thinks Lazy Susans are funny), and admired the wispy clouds in the blue ("boo") sky. Between the fresh air from our walk and then playing with bubbles ("buh-BUL") outside, Little B was ready for a nap half an hour early today.

My friend Jen recently had a baby girl, and today is my day to take over dinner for her family. So while B naps, I'm making a hearty butter bean soup accompanied by some yummy Italian bread to take to them this afternoon. 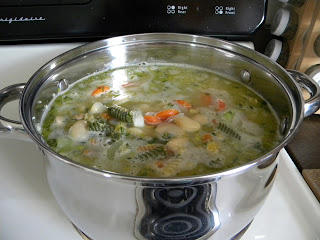 I used fresh herbs from our deck garden, and the scrumptious smells are wafting through our apartment tantalizingly. Good thing I made enough for us, too!
Posted by Unknown at 10:07 AM No comments:

My husband isn't very attached to many people, places, or things. In some ways, I really like that about him. He's a homebody, and he genuinely enjoys spending evenings and weekends doing family things with me and Little B.

There are a small handful of things to which he is QUITE attached.

Teddy is one of them. Teddy is an old, old, old stuffed bear that N has had since he was a baby. Teddy is worn, dingy (even though I've washed him several times), and patched up in multiple places. Teddy has one white eye (the "pupil" portion has long worn off) and a tiny piece of the other still attached. His little red tongue is barely hanging on, and his button nose is a replacement.

Yesterday, I was at WalMart to pick up a new zipper for a skirt I need to repair when I saw that there was a small bin of buttons on sale. I found a couple cute turtle ones that I couldn't resist and then I saw two perfectly round buttons, just the right size for Teddy's new eyes.

I texted Nich at work: "Would you be okay with Teddy getting Lasik today?"

A few minutes later, he responded (surprisingly), "Only if I can get Lasik, too. :)"

The smiley face told me it was a go.

The hysterical thing is, the combination of the way I stitched the buttons on and Teddy's little red tongue sticking out, Teddy kind of looks like "dead" cartoons. You know what I'm talking about, right? Like this. 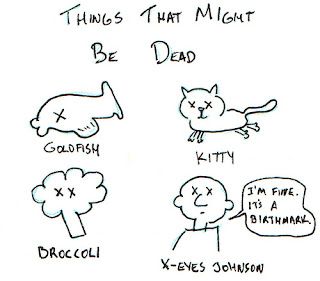 But N really liked Teddy's new eyes. He even said that it reminded him of Joe Cool. 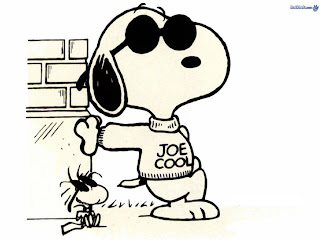 We love all things Snoopy in this household. For me, it traces back to a little black and white Snoopy that my grandpa got for me when I was a baby. Little B even has his own Snoopy that he sleeps with in his crib.

Anyway, I digress. Without further ado, here is the new and improved Teddy. 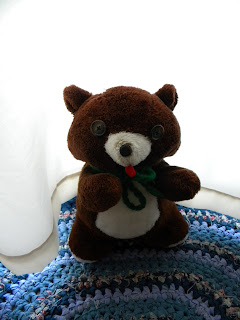 Posted by Unknown at 9:54 AM No comments:

What I Did Last Weekend 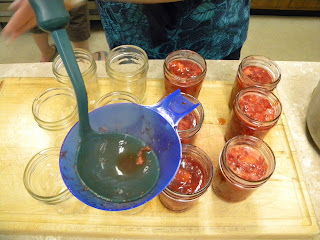 Due to all the recent traveling and meeting new people, my introverted husband didn't want a party this year.* So I cooked him his favorite meals for dinner for the week preceding his actual birthday, and then we had his best friend and family over for wings and cake on his birthday eve. 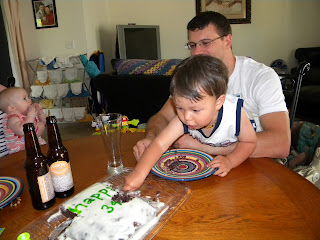 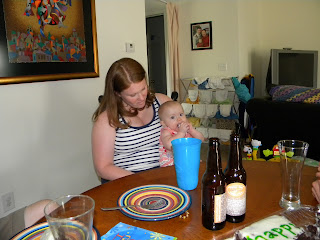 For N's actual birthday, B slept in (which meant so did we!). After a slow breakfast, we headed downtown and poked about at the farmers' market. We found fresh summer corn (yum!). We ate lunch out at TGI Friday's, which seems to be a foolproof eating out location for B. He has yet to get squirmy and discontent when we're there, and he just loves socializing with the wait staff. We don't know what it is, but we like it! 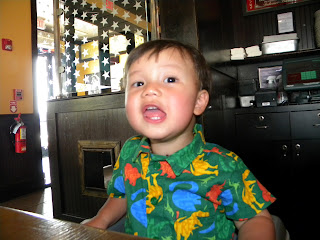 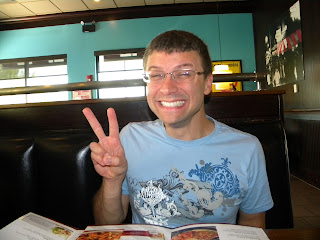 We came home and took long naps, and then went out to our new favorite local barbecue place for burgers and ice cream. 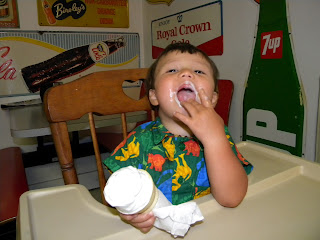 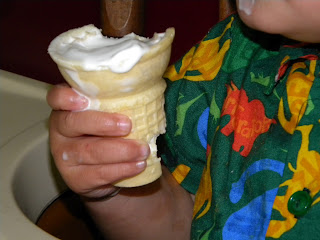 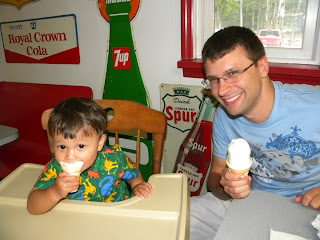 *Which I later realized was just as well, because the worship pastor at our church has the same birthday. He turned 40 and apparently had a big party, and since we have some mutual friends, that wouldn't have worked out well.
Posted by Unknown at 10:45 AM No comments:

I just realized I've been negligent in blogging for over a month now. We've been on the road a lot and spending a lot of time outside. I promise an update soon!

Until then, here's some cuteness:

Fill your paper with the breathings of your heart. (W. Wordsworth)